What Is the IRDS™?

From Moore’s Law to NTRS to ITRS to IRDS™

The semiconductor industry has a unique distinction among all the industries of having begun with a roadmap. In most cases an industry roadmap is initiated only when that industry requires a major revolutionary revision that departs from the way such industry had operated for decades.

The ITRS (or International Technology Roadmap for Semiconductors) was produced annually by a team of semiconductor industry experts from Europe, Japan, Korea, Taiwan and the US between 1998 and 2015.  Its primary purpose was to serve as the main reference into the future for university, consortia, and industry researchers to stimulate innovation in various areas of technology.

A handful of these areas include:

In 2005 the ITRS published the first white paper where the terms “More than Moore” (MtM) and “More Moore” (MM) were introduced for the very first time. 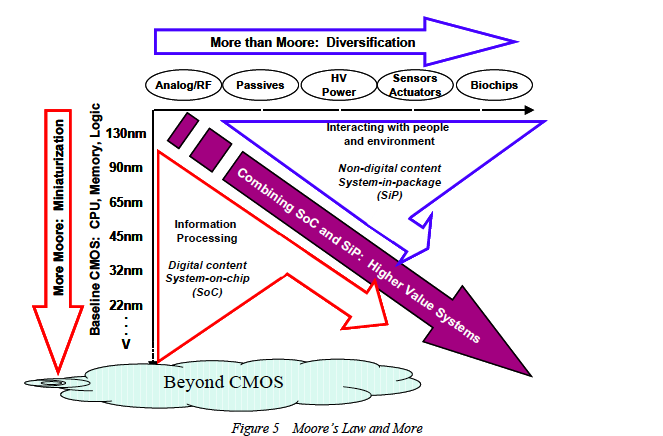 This announcement heralded the introduction of the iPhone and the iPad in the following years. Therefore, in December 2012, during the annual meeting held in Taiwan, the ITRS decided to reorganize in order to address the renewed ecosystem of the microelectronics industry. 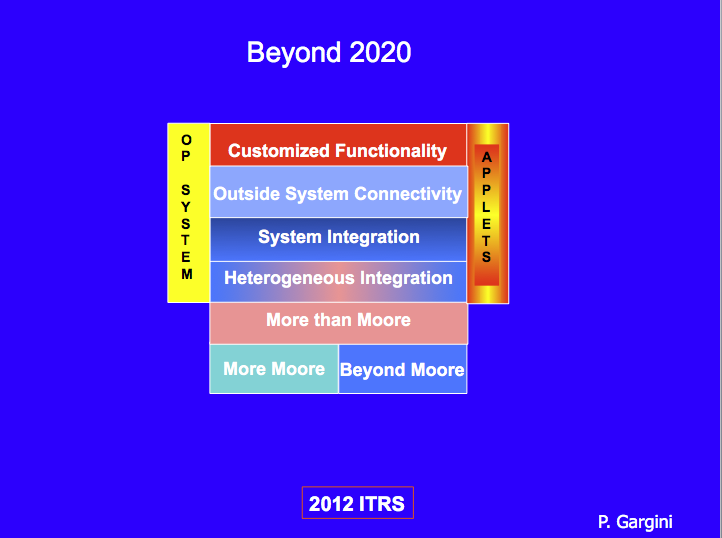 To accomplish this task the International Roadmap Committee (IRC) developed in the 2013-2014 timeframe and identified seven International Focus Teams (IFT) and renamed the roadmap as ITRS 2.0:

All IFTs included all the elements of the ITRS plus many new elements, such as heterogeneous integration, wireless connectivity, etc.

In particular, the Beyond CMOS IFT was tasked to take an in-depth look at devices that were not based on variation of MOS devices (i.e., look beyond electronic conduction) such as spintronics or magnetics.

It soon became clear that the goals of ITRS 2.0 were spreading well beyond the limits of CMOS devices and related technologies and were addressing a much broader approach to system integration, including, for example,  topics of communications spanning from conductors to wireless to fiber optics and exploring non-electron-based technologies.

It became evident that time had come to be hosted by a world-recognized scientific organization that was already covering all these topics from a fundamental point of view. In May 2016, the International Roadmap for Devices and Systems (IRDS™) was initiated under IEEE sponsorship. The 2017 edition was the inaugural edition of the IRDS™.

International Roadmap for Devices and Systems™

What is the IRDS™?

The IRDS™ is a set of predictions that serves as the successor to the ITRS. The intent is to provide a clear outline to simplify academic, manufacturing, supply, and research coordination regarding the development of electronic devices and systems.

The goals of the roadmap are as follows:

The shift and evolution of the roadmap from the ITRS to the IRDS™ has translated to an expanded focus on systems. Emphasis has been placed on architectures and applications that deviate from the traditional paradigm of device->circuit->logic gate->functional block->system.

What other technologies are within the IRDS™?

The 2021 IRDS Update is the revision of most chapters of the 2020 International Roadmap for Devices and Systems™, which is the culmination of predicting the next fifteen years' work in analyzing and predicting present and future technological needs. The roadmap encompasses an immense scope of the electronics industry—particularly the semiconductor and computer industries; everything from applications needs down through device and manufacturing requirements are drilled down in the roadmap.

The upcoming 2022 IRDS Edition is a full edition year and will be published this spring.  It will include newly added topics as white papers for Autonomous Machine Computing and Mass Data Storage. Additionally, a white paper addressing the most current challenges for Environment, Safety, Health and Sustainability (ESH/S) will be presented in 2022. Key ESH/S white paper elements will include, for example, supply chain constraints, materials technology versus regulatory Challenges, water/energy/wastewater, and product content/ecology and circularity.

As can been seen, the IRDS™ is far more than Beyond CMOS as it addresses the integrated and complexity of devices and systems. There are a number of critical domains and technologies the IRDS™ includes in great detail. These include system attributes for cloud computing, cyber-physical systems, mobile technologies, and Internet of Things (IoT). Beyond CMOS is just one aspect in the evolution of computing.

Learn more about the IRDS™ Process